Unfortunately, due to the announcement of another lockdown commencing on 04/11/2020 and the closure on Queensgate Market, I have had to rethink my approach to this project once again. Covid-19 has triggered problems in relation to carrying out my practice along with trying my perseverance and creativity more than once during this project. Responding to this brief has proven to be a challenge for me as a fashion and portraiture photographer, as I have felt lost in how to apply my specific skills  to contribute in archiving the market. However, this has not prevented me from pushing past the brain block and contributing to the project. Alternatively, it has encouraged me to step out of my comfort zone and work within the realm of architectural photography. I have now adopted an approach that is completely void of people.

As the sole photographer in the group, my aim was to create a sequence of architectural photographs that document and provide viewers with a glimpse of different aspects that represent Queensgate Market in its entirety. In taking this approach, I think it will be an important feature within the virtual archive, as it will allow future generations to look back and see exactly what Queensgate Market looked like in the year 2020, prior to Kirklees Council’s plans to repurpose the space. I researched into photographer Thomas Fitzgerald, who is known for his photographs of intricate shapes and details found in the everyday objects, streets and buildings around us. His photographs capture the details that we often dismiss due to the fast paced and self-absorbed lives that we live. I have taken inspiration from his style as I think these are the little details of Queensgate Market that should be captured and frozen in time, otherwise future generations will not have the ability to see what the market was once like. 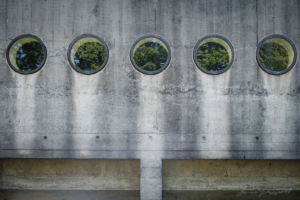 With Fitzgerald’s influence in mind, I began with photographing the incredibly fascinating symbols and designs found on the outside panels of the building. These are recognisable features and are significant in their tie to the market. Something that is important for future generations to look back on when looking at archival imagery of Huddersfield. After two different attempts to photograph specific areas of the building, I opted to using a telephoto lens, which allowed me to capture close up images of the textures and shapes on the tall building whilst remaining at ground level.  Since much of the detail is found high up on the outer walls, this lens allowed me to capture close up images from a distance. My initial idea was to have a variety of photographs that both captured the fine details and gave an overview of the entire building, however I found this relatively difficult because of the trees that were blocking the view to the building. As a result, I opted to work in a similar style to Fitzgerald’s architecture photographs and photograph closeup images of the textures and shapes. 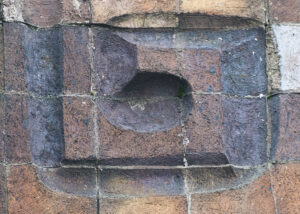 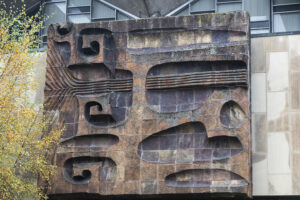 Considering I have very little experience with architectural photography, I was happy with how these set of images turned out. I plan to experiment with them further in photoshop, to try and bring more life and character to the images.