This week’s lecture featured two guest speakers Richard Holman and Leighton Jones, who shared their knowledge, experience and wisdom on how they create and develop work within their own practice.

Richard Holman’s talk focussed on this idea of assumptions and how we interpret things in our daily lives based on our upbringings. Richard explained the role of languages and how this ultimately changes how people around the world view and hear things differently. For example, he pointed out that the sound of a dog is interpreted in many different ways depending on which part of the world you originate from. This difference in opinion does not make either interpretation wrong, but rather highlights how influential culture and experiences during our upbringings are in shaping how we view the world around us. Richard comments on this idea of conventional and unconventional methods of processing and how adopting a conventional approach can limit our creativity. This idea really resonated with me as I experienced this first-hand during my time living in Northern California. Although I spoke the same language as Americans, I found the difference in the pronunciation of words, accent, my lifestyle and particularly my views on gun culture were influenced by my Scottish upbringing. Richard’s insight into this will be very helpful in my MA project, as it has encouraged me to think more in depth about what exactly identifies me as Scottish and how this has attributed to Scotland being a place, I call home.

To explain this ideology further, Richard takes influence from a quote by film maker David Lynch, which states “you don’t make the fish, you catch the fish” (Lynch, 2017). This is such a great analogy as it reinforces this idea that we as creatives do not make new ideas, but rather we take influence from places we have visited, from daydreaming, walking down the street, the people we meet… and we use these existing things we see to adapt and create something different.  “There are no original ideas, it’s just the ideas that you have caught” (Lynch, 2017). 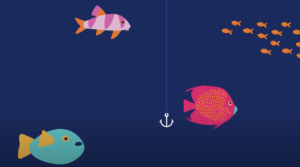 Richard stressed that in order for us as creatives to be the best versions of ourselves and create our most innovative work, we must learn to simply slow down and focus on the now and the things that are around us, rather than placing pressure on ourselves to create a great idea with the end result in sight. This is something I am very aware that I need to implement into my life, as I often find myself frustrated when I lack great ideas and I constantly try to imagine how the finished piece will look, opposed to enjoying the process and learning, growing and developing along the way. This talk has been useful to me as I feel I am now more conscious of slowing down my workflow which will help in this process of self-discovery throughout my MA project. By taking the time to focus and discover more about my Scottish heritage, I plan to carry out mini shoots each week that represent different Scottish elements, without pressure from myself to create a definitive final piece.