In preparation for carrying out the Peaky Blinders inspired photo shoot for a Fashion Brand Marketing student, I initially met up with her in a cafe to go over the projects brief, potential location spots for the shoot and the specific ideas she had for the shoot to look and be photographed like.

On Sunday 1st March I drove out to Wentworth Wood House to check out the grounds. The brief stipulated a location with lots of land, as well as a big stately home, as this is the type of setting present in the TV series Peaky Blinders. Unfortunately the high fee to use Wentworth grounds as a photo shoot location resulted in us having to search for somewhere different cost to much money to use their grounds. The second location I drove to was Elsecar Heritage Centre as we thought the large open landscape and greenery would work well with setting the Peaky Blinders style. However there was not any large buildings that had that stately home feel to them we this location was quickly ruled out.

On Sunday 8th March I visited the final destination chosen for the shoot which was Oulton Hall Hotel. Not only did this location have a vast space of greenery outside, but the hotel was old fashioned, grand, and gave off the impression of being expensive and luxurious. Through family connections, we gained full range over the hotel, with access to the back gardens,  private function suits, the bar, the grand sitting room , and the Repton Lounge which had an old fashioned fireplace. 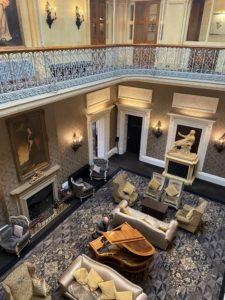 It was very important to scout out the location as it gave me a prior visual knowledge of the space i had to work with, and enabled to me plan ahead and produce photographs that followed the brief and criteria of the shoot. I made sure to visit the location around the time I was planning to shoot, as this would give me prior knowledge of the direction of the sun, which is very important when shooting outdoors. 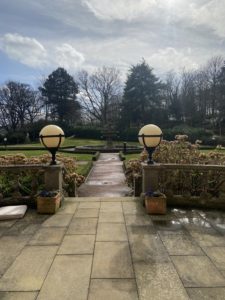