In the build up of my commercial portfolio, I have been working with many different fashion students at Huddersfield University, each of whom come from different fashion courses. Unfortunately due to Covid-19, I have had to postpone my scheduled photo shoots.

On 12th March I had a product photo shoot scheduled in the studio for a Fashion Illustration student. I had photographed her four piece collection at the Corn Exchange in Leeds a few weeks ago, but in addition to this she also wanted the garments to be photographed on a model in a studio environment. The brief stipulated the clothing was to be photographed on a white background suitable to upload to a website, with a variation of full length, mid length and close ups of each of the items of clothing.

On 18th March I had a studio photo shoot scheduled with a Fashion Creative Direction student. The brief elaborates on the concept of the photo shoot, which focusses on The Aral Sea. This was a man made geographical disaster which took place in The Aral Sea, located in Kazackstan and Uzbeckistan, due to the overgrown of cotton in the 90s as a result of the growing demand for fast fashion. This concept was to be achieved through a variety of  monotone makeup colours which would represent the desert,  and small uses of colour to symbolise the little remaining water that is left in the sea. Photography techniques such as shadows, harsh light/sun lighting effects would be used to give the effect of the hot bright sun beating down on the now desert landscape. 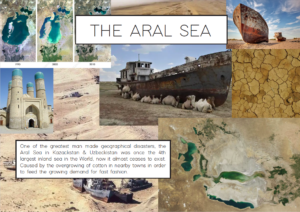 On 23rd March I had a product photo shoot scheduled in the studio with a Fashion Brand Marketing student, where I was to photograph the 30 piece collection of clothes from the Peaky Blinders inspired location photo shoot I had already photographed. The product shots were to be uploaded to a website, so it involved photographing full/mid length shots and close ups of each of the three suits on a male model on a white background.

On 24th March I had scheduled a location photo shoot with a Fashion Brand Marketing student. The concept of her work was to produce a series of photographs for the brand Anthropologie, with the intent to introduce the brand into the Indian market. This would be achieved through through two photo shoot destinations, located in Leeds City Centre. The first was a natural setting (parks, green landscape, floral background), as well as architectural structures and designs such as The Victoria Arcade and The Ivy.

On 20th April I had a photo shoot scheduled with a Fashion Design with Textile student. This location photo shoot was going to involve photographing a three piece Haute Couture collection in both a warehouse and the streets of Manchester. The designer wanted to contrast the elegance of the clothing with a more urbanised location, giving a sense of wildness to the picture. 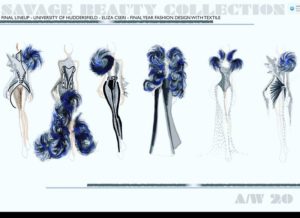 On 24th April I had a location photo shoot scheduled with a Fashion Design with Marketing and Production student.  This shoot was to take place in Manchester City Centre, and was centred around a three piece collection she has designed. As given in the project brief the collection is “inspired by life in London, the collection echoes the chaos and voices of the generation, where abstract meets 3D structure and welcomes matters on mental health.” (Carvalho, 2020) Given the nature of the project and the deep meaning behind the clothing, it was decided that a urban location in a busy city centre would help represent the concept in the form of a narrative. 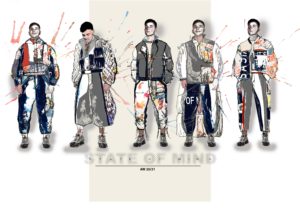