I submitted the photographs Chloe took as part of my second crit group session with Alex Coles. I received a varied range of feedback from both Alex and others in the group. Alex was interested in the idea behind my project and that I am not only focussing on my Scottish heritage but that I am incorporating this blend of the Italian and Scottish influence in my life.

Alex encouraged me to look at elements of Scottish history with a focus on events such as the ice cream wars in Glasgow and advised me to watch the film Comfort and Joy from 1984. I did some research on the ice cream wars as this is something I am not aware of and found that this feud took place during the 1980s in East End Glasgow and involved criminals using ice cream trucks and the selling of ice cream as a front to sell drugs and stolen items on their routes. The dispute and aggression between ice cream truck owners broke out when competition arose and multiple people started manipulating this business for illegal gain. The conflict involved owners stealing goods from each other’s vans and using weapons as a form of attack. The film Comfort and Joy represents this event and narrates the story of a Scottish DJ who becomes caught up in the rivalry of two ice cream truck owners. Although an interesting area to learn about Scottish history, this is not something I would like to include in my project. My personal project is based on things I have experienced and memories I have of Scotland. I did not grow up during the time of the ice cream wars and I also did not around Glasgow so for me I did not experience this rough, brutal and dark life many people who lived in Glasgow were exposed to. I therefore find it difficult to connect with the material Alex has advised me to look into and incorporate in my project.

However, Alex also showed me the early work of Cindy Sherman, an American photographer who is famously recognised for her vast array of self portraiture work which she produced during the latter part of the 20th century. I was really interested in her work as Sherman has a keen interest in exploring identity and states ” I wish I could treat every day as Halloween and get dressed up and go out into the world as some eccentric character” (Sherman, 2012).  Although Sherman is the star of her own photographs, the images do not portray her personality, but rather she uses photography as a tool for allowing her to take on different identities and portray them visually to the world. Through wearing guises, she depicts different characters and plays on and challenges stereotypical perceptions of women in the media, creating images that reflect the roles society expects them to undertake. I found researching about her work very interesting as Sherman is responsible for every aspect involved in the creation of the photographer. Not only is she the photographer and model, but she is the hairdresser, make up artist, stylist and set designer. This is something I would like to incorporate into my own self-portraits, as I feel this will enhance the personal approach of my project.

One of Sherman’s photographs that I was drawn to is a black and white photograph taken from her project Untitled Film Stills. The close cropped photograph shows Sherman dressed, in what looks like 1950s style clothing, staring off into the distance. This image is very intriguing as I found myself more fascinated to know what she is staring off into the distance at, rather than what is being portrayed in the photograph. This idea of creating a narrative beyond the camera frame is something I did in the posing with Chloe and is a feature I would like to incorporate into my own self portraits. I think it helps portray a wider picture and encourage the viewer to think about the possible connection the subject may have with the location. 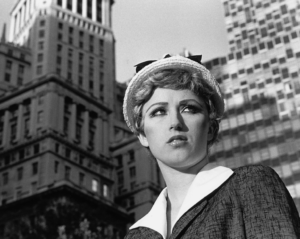